A symbol of generosity and solidarity, for a place of worship, keeping it operational and open to the community it serves.

The Association of Friends of the Hellenic Church of Bucharest was established to support the day-to-day functioning as well as the long-term preservation of the Greek Orthodox Church of the Annunciation, a beautiful, exquisite and unique Greek Orthodox Church in Bucharest, Romania, that combines harmoniously two traditions: externally, the Ionian temple; internally, the byzantine basilica.

FHC’s efforts are welcomed by the Greek Embassy in Romania, as well as the clergy that is holding the liturgy for the Church of the Annunciation:

It is with great pleasure that I welcome the establishment of the “Association of the Friends of the Greek Church of Bucharest”. It follows the example of a distinguished tradition of Greek benefactors. I hope that the Association will be supported by the whole Greek Community in Romania.

The Greek Community of Bucharest, since its initial foundation, wished to construct a Greek Church in the city. On the 15th of May 1883, at the residence of the Greek Ambassador Dragoumis, an assembly of prestigious Greek expatriates in Romania was held and a committee for this great plan was founded. The efforts continued, after some years, by the Ambassadors Douroutis and Paparrigopoulos.

In 1890, the members of the Greek Community established the association “Evangelismos”, of 400 members aiming at collecting the necessary funds for the construction of the Greek Church. The main donor of the church was Panagis Charokopos, a Greek expatriate from Kefallonia.

The construction works of the Greek Church started in 1899, based on a design of the renowned German architect Lardel. The church is designed in a unique style that does not resemble with any other. It is a three aisles Basilica that externally appears as an Ionian temple with a gable roof. The church’s ashlar masonry has been constructed by the famous sculptor Nikolaos Halepas (brother of Yannoulis Halepas). The liturgical pottery was offered by the Greek donor Grigorios Maraslis from Odessa. Nina Haita and Cleopatra Xenokratous-Kyriazi donated the crystal Venetian chandelier, while Hristofis Zerlentis donated the bronze gold-plated chandelier. The icon painters Konstantinos Livadas Liokis and S. Apostolou were responsible for the mural painting of the church; the artists applied the technique of oil painting of the School of the Nazarene.

On the 25th of March 1901, following the foundation of the Greek Church, the first service was held by Archimandrite Nikodimos Oikonomou, in the presence of the Greek Ambassador Argyropoulos. Plenty of people participated. The citizens of Bucharest considered the church as a monument of architecture. King Carol I of Romania visited the Greek Church and expressed his admiration for the glorious temple that adorned the Romanian capital.

The Greek Church of “Evangelismos” was open to the Greeks of Bucharest for a long period, offering important spiritual refuge. Father Timotheos Evaggelinidis, Father Konstantinos Moraitakis and other renown priests served at the church.

Nowadays, the Greek Church continues to attract the Greeks of Bucharest, a community that is significantly growing. In 1999, the temple was fully restored at the expense of Dimitrios and Eleni Grigoriadis, the eminent donors from Thessaloniki. A part of the mural painting of the church was re-created by Sergiu Petrescu, Professor at the Faculty of Fine Arts of the University of Bucharest.

The year 2017 is also a landmark for the history of the church, since the “Association of the Friends of the Greek Church of Bucharest” was established. The purpose of the Association is to continuously support the historic Greek Church, so that it always remains a monument of the Hellenic presence in Bucharest.

Esteemed Ladies, Esteemed Gentlemen, I urge you to support the efforts of the “Association of the Friends of the Greek Church of Bucharest”. Each one of us can contribute to sustain our Church and to promote our Community, exactly as our compatriots have done in the past. 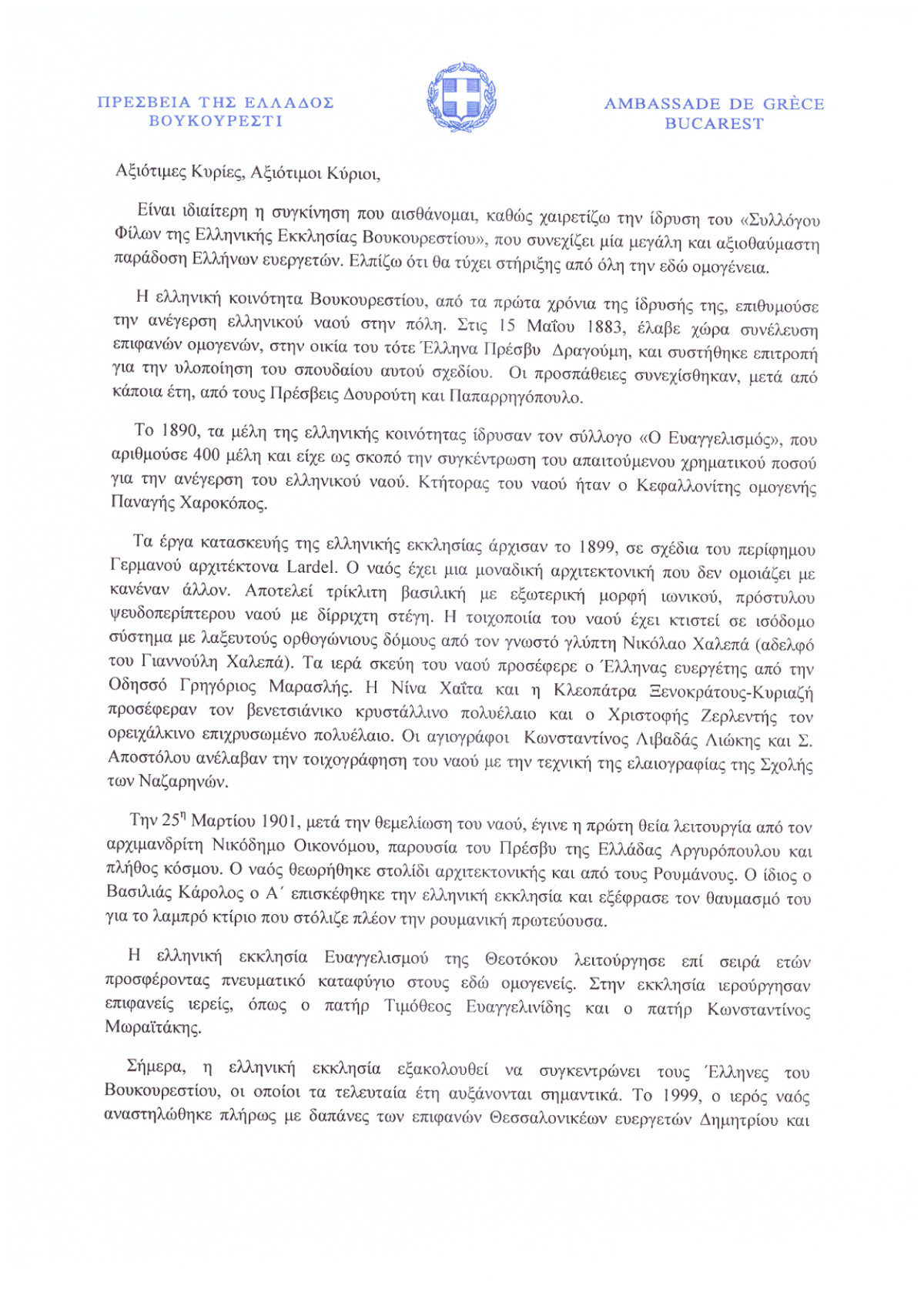 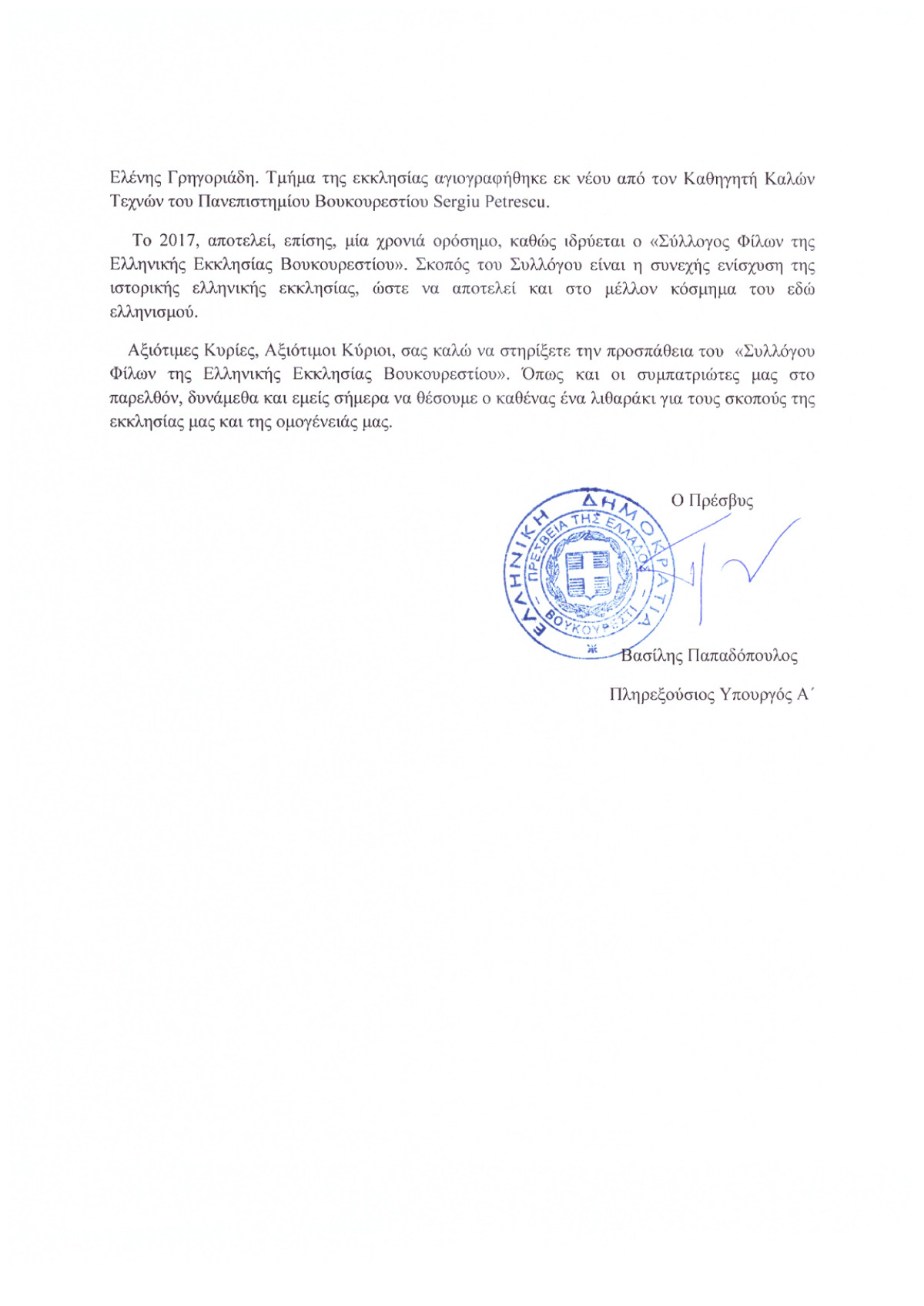 Please visit the News section of the FHC website, for up to date information about progress updates, events and community actions.

By the end of the 19th century, the Greek Diaspora in Romania was a thriving community.
This group was determined to create its own place of worship, highlighting its inheritance: the Hellenistic tradition, a cornerstone of modern Europe; the Orthodox spirit, pillar of faith and spiritual guidance. Many problems had to be solved, many obstacles to overcome.

Symbol of Greece, Treasure of Bucharest

The Church of the Annunciation is important for its beauty, architecture and historical significance and is a listed monument of the Romanian capital. It is the pride of the Greek community in Bucharest, the friends of Greece and the Orthodox faith.

The Church of the Annunciation is the one heart of the Greek Orthodox Christian faith in Bucharest. Its preservation, continued functioning and promotion of the values it embodies is essential to the local Greek community.

There are many ways to help us achieve our mission from anywhere in the world either through your time, financial contributions or a combination of both. No kind gesture is too small and every effort counts to make a difference.

See how you can help

An arhitectural work of art of timeless beauty

This website uses cookies to improve your experience while you navigate through the website. Out of these, the cookies that are categorized as necessary are stored on your browser as they are essential for the working of basic functionalities of the website. We also use third-party cookies that help us analyze and understand how you use this website. These cookies will be stored in your browser only with your consent. You also have the option to opt-out of these cookies. But opting out of some of these cookies may affect your browsing experience.
Necessary Always Enabled
Necessary cookies are absolutely essential for the website to function properly. This category only includes cookies that ensures basic functionalities and security features of the website. These cookies do not store any personal information.
Non-necessary
Any cookies that may not be particularly necessary for the website to function and is used specifically to collect user personal data via analytics, ads, other embedded contents are termed as non-necessary cookies. It is mandatory to procure user consent prior to running these cookies on your website.
SAVE & ACCEPT